Pink Butcher Paper – How and Why We Use it in BBQ

Pink butcher is an incredibly useful tool to have in your BBQ arsenal, that can speed up cooks, help retain moisture, and result in better barbecue. Learn all about it in our guide. 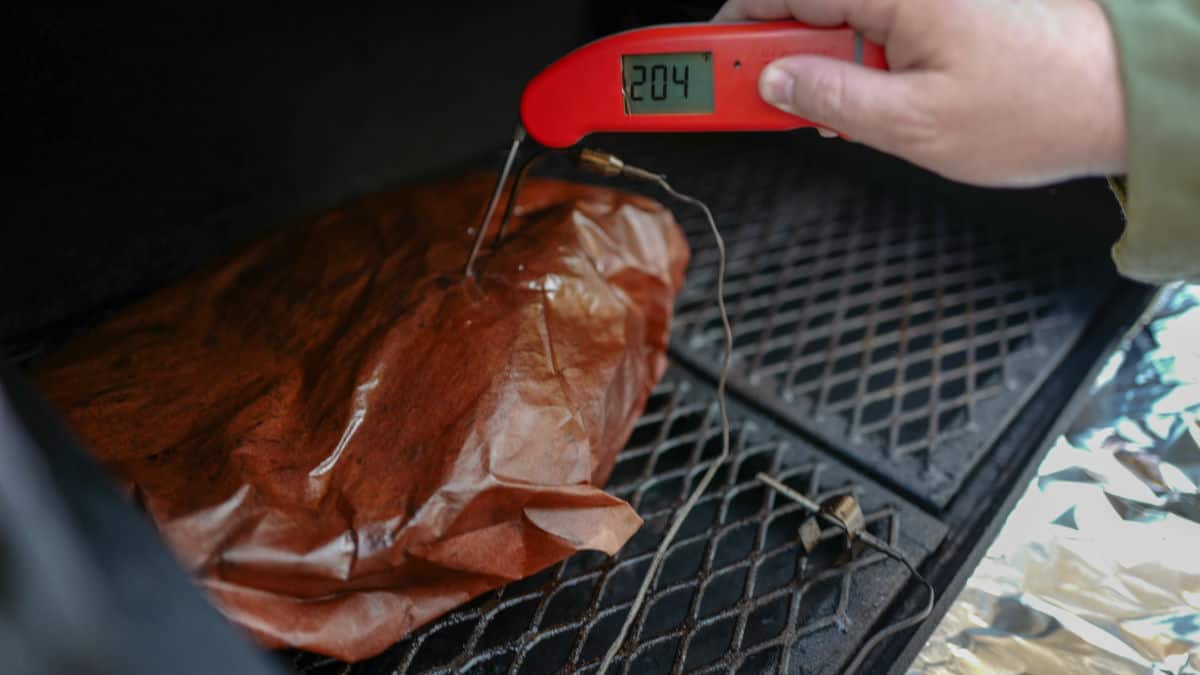 Ever wondered if there might be an alternative to aluminum foil for smoking and grilling? Foil is excellent at retaining heat, but it’s awful at obtaining a crispy, brown bark because it creates condensation — so what could be used instead?

Pink butcher paper has become a must-have BBQ accessory in recent years, and it has, in fact, been used by BBQ professionals for many years. But what makes butcher paper a useful accessory or tool for barbecuing and grilling?

We’re going to figure out what pink butcher paper is exactly and why it’s a better alternative to aluminum foil and other papers.

What is Pink Butcher Paper?

You’re probably most familiar with pink butcher paper as the wrapping for your pork chops, steaks, ribs, and other meat cuts from the butcher. The paper is mostly known as pink butcher paper, but some might know it as peach paper — tomato, tomahto.

There are other variants of “food” paper, including freezer paper and white butcher paper. But, these shouldn’t be confused with one another. First of all, white butcher paper is similar to the pink/peach kind, but it has been bleached and shouldn’t be used on the grill or smoker. Freezer paper contains a plastic film on one side, which is excellent at preventing food from sticking, but it also makes it unsuitable for the grill or ‘cue.

Why Has Pink Butcher Paper Become So Popular?

BBQ professionals have used pink butcher paper for years, but only in recent years has it become popular among backyard grillers and pitmasters as well.

Aaron Franklin was probably the one who popularized pink butcher paper. Franklin is the owner of Franklin Barbecue, which is one of the most popular BBQ joints in Austin, Texas — if not in the U.S.

When I say popular, trust me — hungry crowds line up and wait for hours to get their share of what’s on the grill every day. It’s a legendary place and should definitely be on any grill-lovers bucket-list.

The place has seen a lot of famous faces, including Barack Obama and Anthony Bourdain, who has praised the brisket multiple times.

Soon, food-lovers began noticing how Aaron Franklin wrapped his brisket in pink butcher paper, and so the trend started.

How Do You Use Pink Butcher Paper?

Pink butcher paper in BBQ is generally used to hold moisture while the meat finishes cooking. Many pitmasters will also wrap large cuts of meat, such as brisket while smoking to get it past “the stall.”

If you aren’t aware of what the stall is, it’s basically a point during the low n slow cooking process where the internal temperature stops rising or stalls.

Wrapping your meat during the last stages of cooking will help to lock in heat and moisture. One reason that pink butcher paper is preferred over aluminum foil is that it allows the meat to breathe better. You can even speed up the cooking time by wrapping your meat, making it an excellent hack if you’re in a hurry.

Comparing it to Steak Paper

Butcher paper and steak paper might look similar, but there are distinct differences that set them apart.

Steak paper is heavier and thicker; it’s designed to protect the meat from the air and resist staining. It’s available in various colors, each indicating the type of meat it’s holding.

Smoking with steak paper isn’t ideal. Because it’s heavier and thicker, it won’t allow smoke or flavor to penetrate the food, giving you a disappointing result.

Comparing it to Foil

Aluminum foil is commonly used to wrap meat during low n slow cooking and smoking — it even has its own name: the Texas Crutch.

Texas crutch is excellent for pork ribs, but on beef? Not so much. When something is wrapped in foil, it creates an impermeable layer that won’t let smoke or flavor in. Foil also won’t allow heat to escape, which means the meat will keep on cooking even after being removed from the heat.

On the other hand, paper will give you a more consistent heat without locking the moisture in place. This is not to say that you’ll end up with dry leather — the paper allows only excess moisture to escape, leaving a crisp bark and a moist center.

Does Pink Butcher Paper Have other Uses??

Pink butcher paper can be used for various purposes around the kitchen, including keeping meat’s warmth and tenderness as it waits to be served. This is actually what Aaron Franklin uses pink butcher paper for.

The pink paper can also be used to wrap leftovers or for serving to add a bit of color in your presentation. Some nifty cooks form pieces of paper into cones for serving chicken wings and fries.

Pink butcher paper can also be used for other cooking techniques, including dry brining and “en papillote.” When dry brining, you salt your meat, wrap it in the paper and let it sit in the fridge, many cooks prefer dry brining to wet.

En papillote is a French cooking technique where you create a pouch for the meat out of butcher paper or aluminum foil. You add spices and seasoning, then close it up and cook. It’s an excellent technique for steaming fish and seafood.

Where Can You Buy it?

Pink butcher paper used to be for commercial purposes only, which is why it can be challenging to get your hands on. In saying that, you can surely find it at your local barbecue shop or buy it directly from a wholesaler or manufacturer

Amazon sells a variety of pink butcher paper, but keep in mind that it’s usually sold in large rolls that are most suitable for restaurants. For home use, a 150’ roll is more than enough.

Before you purchase butcher paper online, make sure it’s approved for food, look for FDA-approved and food-grade paper.

As with any other cooking technique, there’s always something new to discover when grilling or smoking — whether it’s a cool trick like pink butcher paper or a fun gadget that suddenly becomes essential.

We’re sharing a lot of cool techniques as well as gadgets, tools, and accessories on our site, so make sure you’re taking a look around. And if you happen to have any grill-enthusiasts among your friends and family, do share this article.

If you have any queries, comments, things to add or simply want to say ‘hi,’ leave your greets in the comment section, and we’ll get back to you. 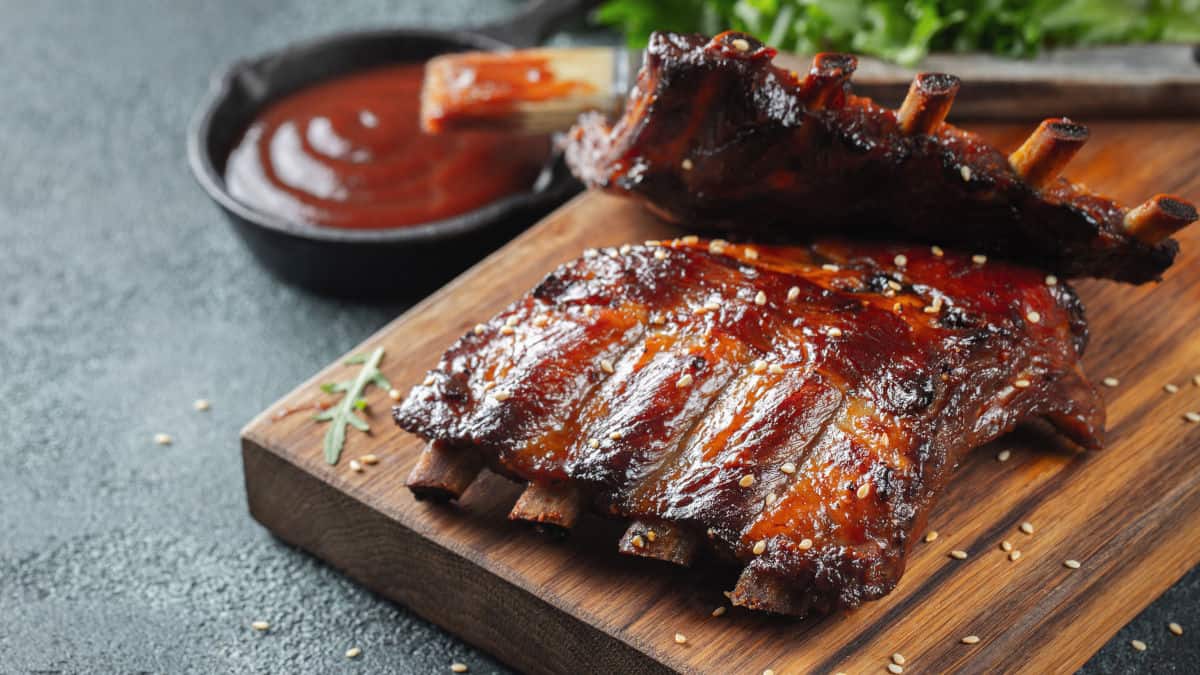