Skip to content
Barbecue Grilling vs BBQ – What is the Difference?

Grilling vs BBQ – What is the Difference? 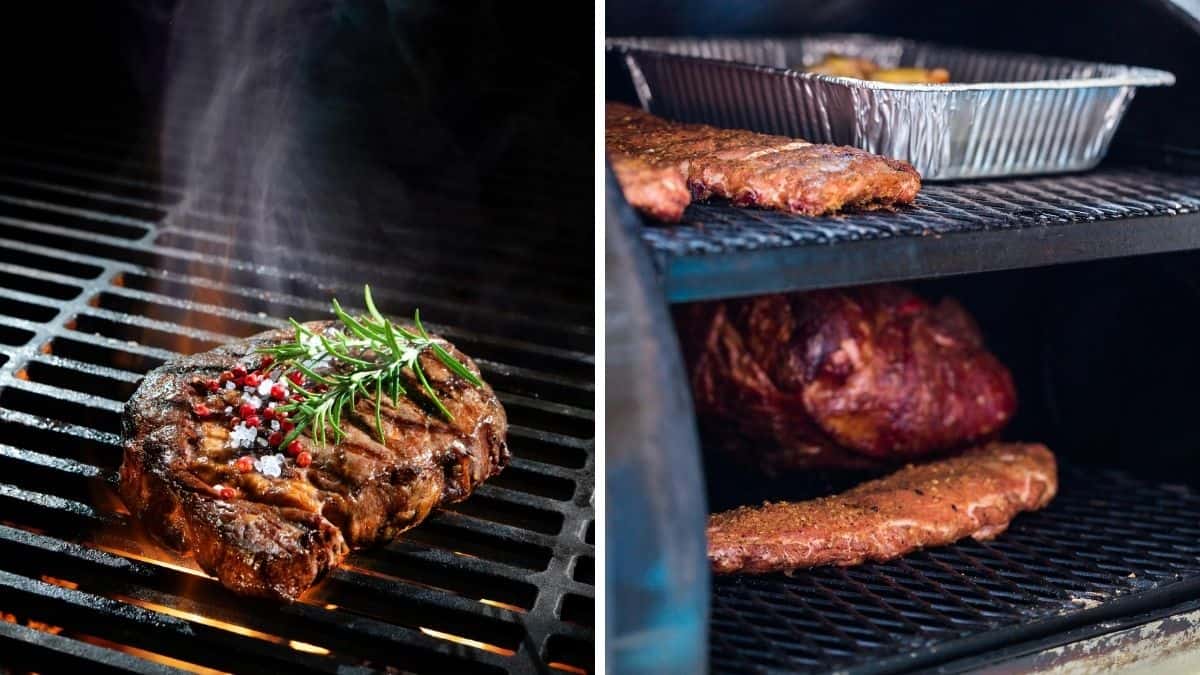 What is the difference between barbecue and grilling? The terms are often used interchangeably.

The beginnings of both can be traced back to the same cooking origin — although these are two very different cooking techniques.

In this article, we look deeply into grilling vs BBQ to really understand the difference between the two techniques.

In addition, we’ll also share which cuts of meat should be prepared with each.

Let’s get that time machine fired up because we’re going way back in time to when the Spanish explorers first discovered what has become one of our favorite cooking methods.

Before We begin – A Video Overview

Before we get into the meat of the article – pun intended – I thought it would be good to share this video overview of the differences between grilling and BBQ.

Check it out, before reading further details that come after.

Many Moons ago Back in Spain…

Gonzalo Fernandez was the first to use the word “barbacoa” in his book: De la Historia General y Natural de las Indias, where he used the word to describe the grill and not the cooking method.

With time, the term Barbacoa worked its way all across the Caribbean before ending up in English dictionaries to describe both the cooking method, as well as the actual grill.

In today’s world, when we hear the word grilling, we immediately think about the classic backyard grill. Grilling is where we built a fire to cook chicken, corn, hot dogs, and many other delicious dishes.

However, the humble backyard grill didn’t come to life until after WWII. When the soldiers returned home, suburbs were built, picnics and outdoor cooking became the new norm. In fact, nowadays, it seems as if every household owns a backyard grill.

Even though grilling and barbecuing share the same roots, today, the two techniques couldn’t be more different — which is what we’re going to be looking more into now.

Most people agree that modern barbecue was first made in America around the 1800s.

Most believe that the Cowboys were the first to slow cook their meat for a long period of time to make it tender.

Others believe it started with pig farmers in the south. They would let them roam in the wild, which made their meat quite tough.

However, I’s quite clear the barbecue was an important part of southern culture. Cuts of meat that could be barbecued were cheap and could feed lots of people. Because the pits were large, lots of meat could be cooked at once, and barbecue became a natural choice for church gatherings and other social events.

The first barbecue restaurants were more pits than restaurants. They were usually just a concrete floor with a corrugated roof and some rough walls. Barbecue pits were among the few places where people of all ethnicities congregated.

Barbecue evolved differently across America, depending on what animals were available and how they were served.

North Carolina is known for mainly chopped pork that’s served with a vinegar sauce. In the central south, folks prefer to have their pork pulled. In Memphis, the barbecue is served with a tomato-based sauce mixed with molasses and peppers. In Texas, beef is king, and brisket is the all-important cut of meat.

Barbecue and Grilling, What are the Differences?

One of the main areas where grilling and BBQ differ is the equipment required. That’s a long discussion for another day, but here are a few examples of the equipment used for both:

A few types of BBQ smokers:

A look at a few different types of grills:

What the two techniques do share, however, is a grill grate and fire. And from here on, there are four distinct ways the cooking process differs between the two styles:

Different types of meat require various preparation and cooking methods to achieve a tender and delicious meat. This is the main reason why there are two styles of cooking to handle different cuts.

Let’s break it down:

Barbecue is ideal for large, fatty, tough meats such as pork shoulder, butts, brisket, or ribs. This is due to the lower temperature and longer, slower cook needed to make tough cuts tender.

Barbecue has to cook low and slow for a long time. It can take anywhere between four and twenty-four hours, depending on the meat, in order to render out connective tissues and fats, to create a tender meal.

Low temperatures are needed to have a long slow cook. Ideally, a barbecue is done between 200F and 275 degrees Fahrenheit.

The smoke is what creates that aromatic experience to true barbecue. Common hardwoods used include hickory, oak, mesquite and many fruit and nut woods.

Thin cuts of meat such as steak or chicken breasts, or ground meat such as burgers and sausages. No large tough cuts for grilling, they’d burn and not have time to tenderize.

Five to fifteen minutes of hot and fast cooking time is all it takes to grill something, typically.

No Smoke – The meat isn’t on the grill long enough to be affected by, or take on any smoky flavor.

The Use of Rubs and Marinades

A little sprinkle of a good spice mix or a flavorful sauce is a must for grilling, barbecuing, and smoking. However, whether you’re using dry rubs or wet marinades depends on which method of cooking you’re using.

Stronger seasonings – wet or dry – are used for barbecue. Due to the long, low and slow cooking time, the strong flavors of the seasoning get to work their way deep into the meat. The lower temperature will also preserve the flavor of the seasoning without burning or carbonizing it, which could result in a bitter taste.

This is also why light seasonings are preferred for hot and fast grilling – the hot temperatures will cause a strong seasoning to taste bitter and just plain off-putting.

Additionally, wet marinades should be avoided with most grilled meats. You see, the moisture in the marinade prevents browning and the added flavor it brings.

Sauce BBQ at the End, Not at All When Grilling

Barbecue sauce is a perfect combo of sweet and spicy flavors, and it goes perfectly with any poultry or meat.

But, because barbecue sauce contains sugar, it will begin to burn at temperatures above 350 degrees Fahrenheit (177 degrees Celsius). When barbecuing, you don’t add BBQ sauce until the last hour to prevent it from burning.

When grilling, you generally don’t add this type of sauce at all since it will burn very quickly.

In saying that, many grillers like to add it during the last minutes of grilling to create a glaze over the protein.

The location of the fire and heat source is one of the most significant differences between barbecue and grilling.

When grilling, the meat is placed directly over the hot coals to create that searing, quick cook.

Barbecue utilizes an offset or two-zone fire to create indirect heat, cooking by convection, the hot air in the BBQ, and not from direct radiant heat from the fire.

Indirect heat works like an oven where the food isn’t placed over an open flame. Instead, it’s cooked via convection heat.

Barbecuing and grilling typically use charcoal for their fuel source, but it can vary.

Many pitmasters like to barbecue using wood in their fires to create indirect heat while adding smoke and flavor, whereas the most popular grills tend to run on propane gas.

We hope this quick guide gave you insights into the difference between grilling vs barbecue. We feel it’s important to learn both methods so you can be versatile and get the best out of all cuts of meat, large and small..

Remember, large and tough cuts will require long, slow cooking in order to break down tissues within the meat. For instance, slapping a slice of brisket on the grill would only result in an unchewable piece of leather — not ideal.

And that’s the beauty of barbecuing! It offers a perfect technique to tenderize tough meat that we wouldn’t be able to eat otherwise. Just stay patient while it cooks.

On the other hand, grilling gets it done in a jiffy. It’s what you do when you have friends over for burgers on the Fourth of July.

The high heat means you can be ready to eat within minutes, which is why we love our hot dogs, steaks, and burgers. They cook fast and are ideal for when you need to feed a ravenous crowd.

Now you know the differences between grilling and barbecuing, which method will you use next?

If you have any questions, feel free to leave a comment below.